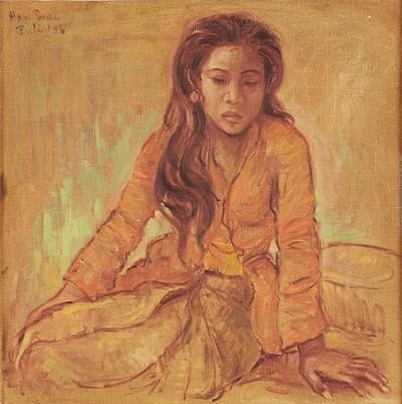 Han Snel had an undying love for Bali. Born in 1925 in Scheveningen, Netherlands, he arrived in Bali along with the Dutch military forces that were tasked with fighting the Japanese troops and the Republic of Indonesias army.

Snel instantaneously fell in love with the island, so much so that he married a local girl, became an Indonesian citizen and converted to Balinese Hinduism.

Nevertheless, it is in his paintings that saw most of his love being manifested the gentle colours, the delicate and refined lines captured the very essence of Ubud, the tranquil island, and most of all, the stunning portraits of Balinese women. A recurring role was his wife, who began modelling for him before they wed.
Han Snel
Balinese Girl, 1956
Oil on Canvas
59.5 x 59.5 cm